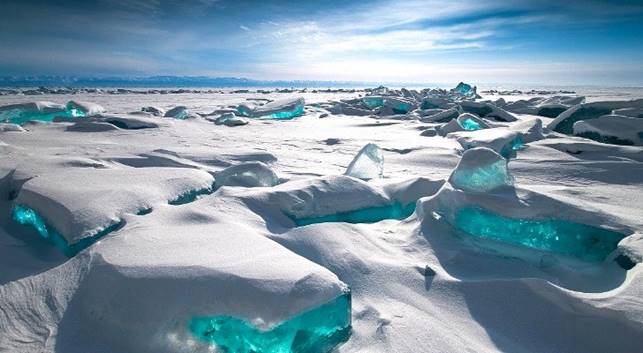 If one believes in man-made global warming it would be right to think it is getting warmer? We should be hearing reports that it is warmer than normal. We should be hearing about summer coming early. But what are we reading just days from May? Some 16 million people are under a winter storm warning, from Montana, where a blizzard warning was in effect, to Michigan. It is the second record-breaking snowstorm in less than two weeks. Possible record snow and cold from the Dakotas to New York.

On the first of May, “Yesterday and today snow came back on the northeastern mountains of Italy. Global warming seems to be less and less convincing,” says Italian geologist Dr Mirco Poletto.” Its been a long hard winter that seems to have no intention of giving up. As a consequence we are hearing very bad news from the agricultural sector.

This year’s long and record-breaking winter has left many fields of Northwest America either frozen or flooded much later than normal and, as a result, farmers are struggling to get their seeds sown on time. Floods stall fertilizer shipments in the latest blow to U.S. farmers.

“We’ve had the longest winter ever,” said Chris Voight, director of the Washington State Potato Commission. “Normally we start planting potatoes the end of February, but this year we weren’t able to start planting until April 1.”

On the last day of April we read that once the clouds cleared from the lastest blizzards temperatures dropped like a stone. On Monday, April 29 both Lewistown and Great Falls set all-time record lows for the day. The mercury plunged to -10.6C (13F) in Great Falls breaking the old record of -10C (14F) set back in 1978 (during solar minimum of cycle 20). And it sunk colder still in Lewiston, enough to cancel school even, with their official measurement of -12.2C (10F) toppling a record that stood for some 116 years; the -11.1C (12F) from 1903 (solar minimum of cycle 13).

For the beginning of May things don’t look anything like catastrophic global warming in Europe either. Latest model runs are reaffirming the brutal Arctic cold front forecast to descend into much of Europe this week. The frigid front looks set to hit Thursday, May 02 with temperatures predicted to tumble as much as 14C below average for the time of year.

Two weeks ago we were one month into spring reading the headlines of record cold in Russia, surprise snowfall in many cities in Turkey, snowfall in parts of Moracco, and even snowing in North Carolina and the earliest recorded snow event ever in Western Australia were being reported, but not in the mainstream press. The cold snap that hit France last week caused Burgundy winegrowers to fear the worst—up to fifty percent losses. Chicago had their latest accumulating snow in 30 years because of global warming?

In Russia record cold threatens crops even though we are deep into spring. “Such low temperatures in the south of Russia (far, far below freezing) are very dangerous, since at the end of April there is an active vegetative period of plants, gardens are blooming, the first crops are sprouting,” warns Meteo-TV. Russia’s Far East set the following minimum temperature records for April 22:

Most Democrat candidates have declared their zealous support for the Green New Deal in forecasting that the world will end in 12 years if nothing is done. “This is the final chance, the scientists are absolutely unanimous on this — that we have no more than 12 years to take incredibly bold action on this crisis. Not to be melodramatic, but the future of the world depends on us right now here where we are.”

The American Thinker asks, “What’s going on? I thought the planet was heating up, with melting icecaps, rising sea levels, and less than 12 years before the earth burns to a crisp? We have been hearing this song and dance for several decades now. The global warming chicken littles keep telling us that snow is a thing of the past and we had better get used to it, along with a warming planet. In 2000, British newspaper The Independent ran this headline, “Snowfalls are just a thing of the past.” In 2014, The New York Times ran a sequel headline, “The end of snow?”

Oh Yeah They are Really Sure About It

They are pretty convinced and want the rest of us to be. “There’s no longer any question that rising temperatures and increasingly chaotic weather are the work of humanity. There’s a 99.9999% chance that humans are the cause of global warming, a February study reported. That means we’ve reached the “gold standard” for certainty, a statistical measure typically used in particle physics.”

Scientists and the press are desperately trying to explain the cold when its supposed to be warming. The question has been recurring since the winter of 2013-2014 when a record cold wave ushered the term “polar vortex” into the common vernacular. The following year produced a similar pattern. Recent news coverage largely echoes reports written then. The suggestion is that the severe cold is a manifestation of global warming. That makes perfect sense to somone losing their marbles.

Swedish teenage environmental activist Greta Thunberg urged hundreds of climate-change protesters in London to never give up their campaign to save the planet as police arrests over disruptions to the city’s landmarks rose above 830. We now have global warming mania taking to the streets.

Now they are talking about giving her the Nobel Peace prize to her but she has it wrong.

We will witness a ‘Catastrophic’ decline threatening the Earth, not because of warming but because of the decimation of insect populations. A global scientific review of insect decline has warned insects will “go down the path of extinction” in a few decades, with “catastrophic” repercussions for the planet’s ecosystems. The biodiversity crisis is said to be even deeper than that of climate change, reports news.com.au. Scientists have already warned the earth’s sixth mass extinction event is under way through biological annihilation.

How come global warming proponents and the press are not hammering the public about serious subject like this? We are in terminal decline and it shows in mens sperm counts. We are in decline because of uncountable thousand of chemicals being dumped into the environment in massive tonage but we have the FDA defending this practice, as we just saw in their recent ruling that Round Up is not causing anyone cancer.

We are choking the planet with plastic microparticles. We are overwhelming the worlds biological systems with the heavy metal mercury as well as with uranium, lead, chromium and other heavy metals. We are increasing radiation exposure as well as preparing to blast humans and other organisms out of existence with G5; just what we need, an untested for saftey fast Internet speed system.

We have real problems that will not get resolved because Democrats and the press have us obsessed with global warming, which is not something that is happening. So yes the world could end in 12 years or it could already be too late to save us from ourselves and this has nothing to do with CO2. One thing for 99.9999% sure, with a Grand Solar Minimum biting down hard, the world is not going to end from too much warming anytime soon.

The National Snow and Ice Data Center (NSIDC) is part of the Cooperative Institute for Research in Environmental Sciences at the University of Colorado Boulder.